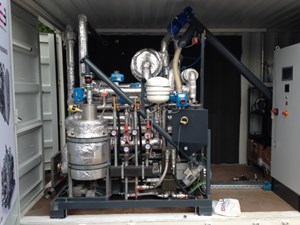 The world’s first mass-produced micro biomass power plant, developed to help SMEs produce renewable heat and electricity onsite, has been installed in Cheshire ahead of a national rollout.

The E3 biomass boiler, developed by German biomass firm Entrade, is the smallest of its kind in world - able to fit through a standard door frame and installed in less than a day.

Unlike most conventional small-scale thermal biomass boilers, the system generates both heat and electricity. It has been specifically designed to benefit SMEs which, according to Entrade, could see energy bills reduced by up to 30 per cent.

“The E3 is reaching the UK market at a vital time”, said James Kong, chief financial officer at Entrade. “While the country is moving away from coal and nuclear [power], it has neglected to keep up with growing energy demand through the development of the renewables industry.

“Large-scale renewable energy requires significant capital and years of planning, which is beyond the scope of most British businesses.”

The E3 system can generate up to 22kW of electricity and 55kW of heat capacity. It also requires less maintenance time compared to conventional biomass boilers and is scalable - allowing several systems to be joined for larger applications.

“We have seen significant demand from UK companies, especially those in manufacturing, agriculture and hospitality”, Kong added.

Entrade is planning to partner with more than 20 UK firms over 2015 to help kick-start a national rollout, creating 120 jobs in the process.

Cheshire-based TW Power Ltd is the first customer and supplier and is currently hosting a demonstration of the E3 at its premises in Macclesfield.

David Tomkinson, director at TW Power, said: “As a small business, the E3 will produce a bit more power than we need, which means that we will sell any excess energy directly back to the grid.

“The E3 produces almost no tar, and runs around the clock with approximately 15 minutes of maintenance per week. Even without running the machine at full capacity, we expect the machine to pay for itself in less than four years through energy savings and subsidies.”