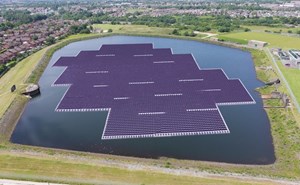 United Utilities is set to install 12,000 solar PV panels on a reservoir in Greater Manchester as part of a £3.5 million project to “keep energy costs and water customers’ bills low”.

The 45,500m3 array on the Godley Reservoir in Hyde will be the second biggest floating solar farm in the world and will dwarf the UK’s current biggest project, an 800-panel floating farm in Berkshire that was built in 2014.

The £3.5 million installation, which is expected to be complete by the end of the year, will generate 2.7GWh of electricity a year, providing a third of United Utilities’ power demand for the water treatment works on the site.

Floating solar farms are advantageous to water companies because they provide an onsite power source without impacting on land use. By covering the surface area of reservoirs, solar arrays can also reduce water evaporation, while the cooling effect of the water can improve the efficiency of the solar cells.

Chris Stubbs, head of renewable energy at United Utilities, said: “We have a target to generate 35 per cent of our power requirements by 2020 and this project will make a significant contribution to that aim.

“While floating solar has been deployed elsewhere around the world, most notably in Japan, it is a new technology to the UK. Installations such as the Godley solar scheme will help us keep energy costs and water customers’ bills low.”

The company plans to complete the project, along with a number of separate land-based installations, before the end of 2015 to ensure that it makes the most of the Government’s Feed in Tariff (FiT) rates, which are expected to drop significantly from January 2016.

United Utilities is also exploring plans for a second floating solar project near Lancaster, but the company’s director of energy strategy, Neil Gillespie, told The Telegraph it was “doubtful” the project would go ahead if subsidy cuts from January are as significant as the Government’s consultation proposals suggest.

Around 1,000 job losses at struggling solar firms have already been blamed on the proposals. However, Paul McCarren, energy services director at Forrest, which is supplying the Godley reservoir project, argued that solar will continue to be an “attractive infrastructure investment” for large consumers of energy regardless of subsidy cuts, due to its ability to significantly lower energy bills.