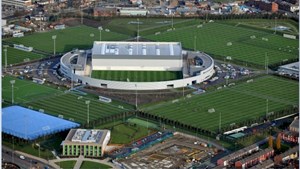 Both of Manchester’s Premier League football clubs have been highlighted as examples of best practice in a new report detailing the impact of climate change on UK sport.

In its report, 'Game Changer', The Climate Coalition explores the changing risks of extreme weather on UK sport, which is disrupting both grassroots and professional sporting organisations.

Football is among the sports worst hit; there is a declining number of people playing weekly, partly caused by increasing incidences of bad weather.

Manchester’s two biggest clubs, Manchester United and Manchester City, are singled out by The Climate Coalition for their work in supporting green initiatives.

The £200 million City Football Academy is Manchester City’s flagship sustainability success, having been awarded a gold standard certification in Leadership in Energy and Environmental Design (LEED).

As part of its construction, more than 30 hectares of post-industrial wasteland was transformed into wildflower meadows, grasses and wetland to support local wildlife.

The club has calculated that each hectare of its playing turf absorbs up to 8.5 tonnes of CO2 a year, while a recycling and reuse scheme means zero waste is sent to landfill. At least 80 per cent of the irrigation water needed for the turf is gathered onsite through rainwater harvesting and storage.

Meanwhile, the construction of Manchester United’s Trafford Training Ground included the creation of its own nature reserve, which forms part of the ground’s wastewater treatment system.

Along with on-site measures, the club also demands high environmental standards throughout its supply chain, having engaged more than 70 suppliers over a five-year period through initiatives like ‘ReUSE-A-Shoe’, which recycled old trainers into new surfaces for sports centres.

Both clubs are supporters of The Climate Coalition’s national ‘Show The Love’ campaign, which is encouraging people to take notice of the local impacts of climate change.