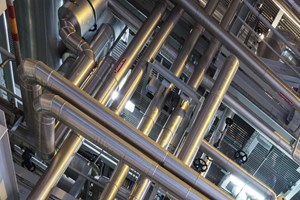 The funding comes from a share of £24 million for nine new heat networks across the country - the first round of a £320 million national programme.

Unlike conventional heating systems, where individual properties have their own boilers, heat networks link multiple buildings in an area to a single heat source.

Networks can use a range of technologies as a heat source, including biomass boilers, heat pumps, energy-from-waste, combined heat and power (CHP) plants, geothermal energy, or waste heat from factories and power stations.

The heat is then pumped around homes and businesses through pipes, cutting heating costs by as much as 30 per cent.

Manchester city centre will host two of nine successful projects from the first round of funding. Once complete, the nine projects will provide heat to approximately 5,000 domestic customers and 50 non-domestic buildings.

Both projects in Manchester, one in the civic quarter and one in the under-construction St Johns neighbourhood development, will use heat produced by a gas-powered CHP plant.

Early stage planning funding has also been awarded for a future project in Trafford.

The result means Manchester is becoming an early frontrunner in the technology. The full £320 million government programme, which will potentially open to commercial applicants in future, is expected to enable up to 200 heat networks to be built.

Heat networks are already popular in parts of Europe, especially in Scandinavian countries like Denmark, where they provide 60 per cent of the country’s space and water heating.

According to the government’s Committee on Climate Change (CCC), heat networks could deliver up to 18 per cent of the UK’s heating demand by 2030, up from 2 per cent today.

Climate change and industry minister, Nick Hurd, said: “This government is committed to ensuring a clean, secure and affordable energy supply for communities and businesses across the country.

“Energy innovations like heat networks can cut costs for households and reduce carbon emissions, as almost half of the energy we use goes towards heating our homes and buildings.”