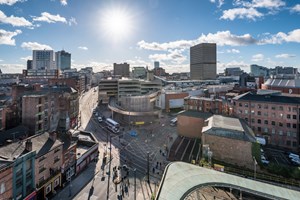 UK data company AirSensa will roll out its first city-wide demonstration of air monitoring technology in Manchester over the next few months to help the city with transport planning.

AirSensa was launched in 2012 as a response to growing concerns about the health impact of air pollution in cities, with a mission to deploy thousands of hyperlocal sensors in urban environments across the UK and Europe.

The company will be working with Transport for Greater Manchester (TfGM) and the University of Manchester to install 200 sensor units in key areas around the city.

In a statement, AirSensa explained its reasoning for choosing Manchester by pointing out that Central and North Manchester had the highest rates of hospital admissions for asthma in the country.

Jonathan Steel, chief executive of AirSensa, said: “Air pollution is the UK’s biggest killer after smoking, but measurement remains woefully inaccurate. You can’t manage what you don’t measure; proper usable measurement is vital if we are to tackle this insidious public health crisis.

“Our unique STORRM analytics platform allow us to accurately measure and analyse air pollution, and for the first time make real time, hyperlocal data available across whole cities. This technology offers a sea-change in how we tackle air pollution, both in terms of helping people avoid its worst effects, and in developing effective interventions and solutions.”

The company has launched a crowdfunder to help roll out the project in Manchester and three other cities. By 2020, it hopes to have installed 10,000 sensors across the UK.

Greater Manchester was one of several major UK cities to recently call for a new national Clean Air Act and more ambitious action on vehicle pollution.