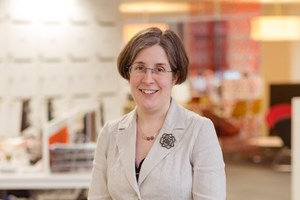 Helen Seagrave, chair of the low carbon economy sub-group for Manchester: A Certain Future, the city’s climate change action plan, outlines the scale of the challenge ahead for the UK’s second city.

Nearly 200 delegates from businesses and communities across the city were treated to keynote speeches from Richard Leese, the leader of Manchester City Council, and Craig Bennett, the executive director of Friends of the Earth, as well as an update on Manchester’s progress from M:ACF chairman, Gavin Elliot.

The 2015 annual report showcases the activity taking place across the city to tackle climate change, covering many inspiring initiatives and projects such as the Carbon Co-op, a community benefit society working to improve the energy efficiency of homes in the city.

However, the overriding message is that we still need to do more, and quickly. At current rates the city will miss its emissions reduction target of 41 per cent by 2020 (against 2005 levels) by a margin of 12 per cent.

Making his first speech in his new role as executive director of Friends of the Earth, Craig Bennett applauded the efforts taking place in Manchester to tackle climate change, but issued a clear challenge to the city to use the new powers being devolved to the city region to show leadership on the climate change agenda.

Bennett said: “If Westminster won’t lead, Manchester can; our future objectives cannot be solely mitigated by top down policies”, before calling for Manchester to:

A panel discussion following the keynote presentations reflected a general consensus on the need to just get on and take action, which is where M:ACF can play a role.

As an M:ACF steering group member, I will make sure we discuss how we can build on the success of the event. I will ensure we consider the challenges issued by Craig Bennett, develop our support for stakeholders across the city to increase the level of activity taking place, and get more citizens and businesses involved.

Achieving the remaining emissions reductions required to reach our 41 per cent target by 2020 will take a concerted effort and M:ACF hopes to play a vital role in stimulating, promoting and encouraging action.

One simple way for businesses to take action is to sign up to the Green Growth Pledge to demonstrate their commitment to environmental action and become more efficient in the process.

Helen Seagrave is a steering group member and chair of the low carbon economy sub-group for Manchester: A Certain Future.