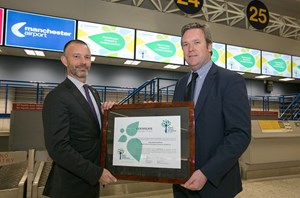 Manchester Airport is among the first in the UK to be awarded Level 3+ carbon neutral status after investing over £7.5 million in energy efficiency, purchasing clean electricity and offsetting emissions.

The airport has been awarded the status by the Airport Carbon Accreditation programme, run by the Airports Council International (ACI).

More than £7.5 million has been invested in energy efficiency projects to date, including working with local and national businesses to develop innovative lighting solutions.

The airport’s award-winning energy management team have now installed more than 25,000 low energy LED lights throughout the airport, including the first on any UK runway.

Over the last decade, enough energy has been saved to power 10,000 homes.

The airport also purchases all of its electricity from renewable sources and compensates for other emissions from its own operations through carbon offsetting schemes.

Collectively, these initiatives have reduced annual emissions from operations from 72,000 tonnes of CO2e (carbon dioxide equivalent) in 2006 to zero in 2016.

Receiving the award on 12 December, Ken O’Toole, chief executive of Manchester Airport, said: “We are committed to being one of the leading European airports when it comes to environmental management.

“As an organisation we recognise that climate change is an important global challenge. This achievement demonstrates the lengths we go to ensuring we balance our role as economic generator, alongside caring for the environment, whilst working with our third parties to reduce the wider impact of our industry.”

More improvements are expected in the coming years. The £1 billion Manchester Airport Transformation Programme, which will increase the airport’s annual capacity from 22 million passengers to 40 million, aims to incorporate new energy efficiency technology.

Olivier Jankovec, director general of ACI Europe, added: “Becoming carbon neutral is no small feat and today actually serves as a timely reminder of how much work Manchester Airport has put into achieving this goal.

“They were one of the airports that participated in the pilot phase of the programme and they have worked their way up through the 4 levels of the programme over the intervening years – we actually launched Airport Carbon Accreditation here in Manchester at our Annual Congress in 2009. So, it really is a red-letter day for Manchester Airport, for the programme and for air transport in the UK.”