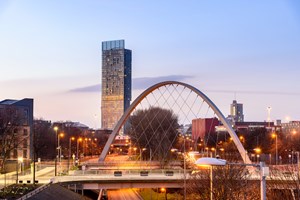 Air quality in Manchester was temporarily the lowest in Western Europe on 8 September, just days before an EU financial watchdog warned that governments were failing to take sufficient action.

A recording taken at 11am at Manchester’s central air quality monitoring station showed the highest reading of dangerous PM2.5 particulates in Western Europe, according to Manchester’s Liberal Democrats group.

PM2.5 is very fine particulate matter that has a diameter of less than 2.5 micrometres. They are so small and light that they can penetrate deep into the human body if inhaled. Older diesel vehicles are often singled out as a major source of PM2.5 in cities.

Meanwhile, the EU Court of Auditors, the EU’s financial watchdog, has argued that European action to protect human health from air pollution has not delivered its expected impact.

While emissions of air pollutants such as particulate matter have been decreasing, most EU member states - including the UK - still do not comply with EU air quality standards and are not taking enough effective action, the auditors said.

Furthermore, the EU’s air quality standards were much weaker than guidelines recommended by the World Health Organisation (WHO) and needed updating, the auditors found.

Janusz Wojciechowski, the auditor responsible for the report, described it as “the biggest environmental risk to health in the European Union” and told The Guardian that daily deaths from air pollution were ten times higher than deaths from car accidents.

Posted under General Interest on 19 September 2018