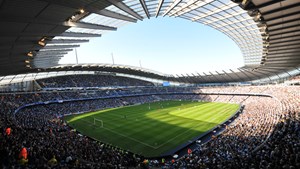 Manchester City FC may be used to winning titles, but they were beaten into second place in the race for best sustainability in sport at a ceremony at the Houses of Parliament this month.

The Green Heart Hero Awards on 13 March was hosted by The Climate Coalition as part of a national campaign to celebrate people and organisations around the country that are helping to tackle climate change.

In the Sustainability in Sport category, Manchester City was one of three sports clubs shortlisted, along with Lord’s Cricket Ground and the eventual winner, Forest Green Rovers FC.

Manchester City was singled out for its £200 million football academy that meets a gold standard for energy and environmental design, as well as a rainwater harvesting system that provides at least 80 per cent of irrigation water and a recycling scheme that has eliminated waste to landfill.

However, the footballing giant was pipped to first place by a relative minnow in the sport - Forest Green Rovers.

The Gloucestershire football club is three leagues below Manchester City but has led the way in sustainability since begin taken over by Dale Vince, the founder of green energy supplier Ecotricity, in 2010.

Forest Green Rovers are aiming to become football’s first ‘zero carbon’ club, having already installed enough solar panels to provide over a tenth of its energy needs, including its robot lawnmower, ‘mow-bot’.

The club also has a zero waste to landfill policy, a vegan-only food menu and is creating an eco-education centre at its stadium.

“Sustainability and sport are two words that aren’t often seen together, but at Forest Green Rovers we’re bridging that gap and are demonstrating that there is another way”, Dale Vince said.

“[It] is proving to be a momentous year for us, as we’ve been promoted to the Football League, named by FIFA as the world’s greenest football club and spoken at the UN [about sustainability in sport].”