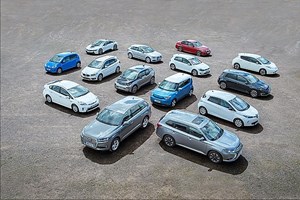 Nearly 70 per cent of company car drivers would use an electric vehicle if they were given the opportunity by their employer, according to government-backed research.

A survey of drivers commissioned by the government’s Go Ultra Low initiative revealed that nearly 690,000 company car drivers would be likely to choose a plug-in electric vehicle if the option was offered by their employer.

There are currently around 940,000 company car drivers in the UK, but only a quarter of UK businesses providing company cars offer a plug-in option.

However, electric vehicles are rapidly growing in popularity due to their minimal running costs, tax benefits, the grants on offer and the increasingly extensive charging infrastructure now in place.

In the first 10 months of 2016 more than 30,000 electric cars were registered in the UK, with around 70 per cent of these going to businesses.

Commenting on the news at Go Ultra Low’s ‘Future of the Car’ Summit in London on 7 November, Transport minister John Hayes said: “Businesses have a role to play in boosting the numbers of electric vehicles on our roads, and this survey shows that employees want to drive them.

Poppy Welch, head of Go Ultra Low, commented: “As an industry it is our collective responsibility to give businesses confidence to be bold and realise the multiple benefits that plugin hybrid and pure electric cars can bring, including cost savings and a carbon footprint reduction.”

“We want to make it easier for companies to adopt these cleaner cars, and recently made £7.5 million available to workplaces who want to install chargepoints”, John Hayes added.

The Go Ultra Low campaign aims to increase the consideration of purchasing electric vehicles amongst consumers and businesses.

More than 75 organisations across the UK have now achieved ‘Go Ultra Low Company’ status in recognition of their commitment to make at least 5 per cent of their fleet electric by 2020.