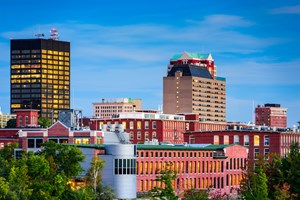 Some of the largest companies in Greater Manchester have pledged to ramp up their environmental commitments following discussions with mayor Andy Burnham.

Representatives from the companies, which included Aldi, the Co-op, United Utilities and Manchester Airport Group, met with the mayor during Green GB Week in October to discuss Greater Manchester’s ambitions to become a leading green city region.

Aldi has set a target to become ‘carbon neutral’ UK-wide by January 2019 through carbon offsetting, using renewable power and upgrading freezers and other appliances. Fritz Walleczek, Aldi’s managing director of corporate responsibility, said: “With more than 20 Aldi stores in Greater Manchester, we are supportive of the new sustainability plans announced for the region.”

Meanwhile, United Utilities has introduced a ten-year green fleet plan to switch all of its vehicles to models powered with ‘home-produced energy’, wiping out four million litres of diesel use in the process.

‘Calling on all businesses’

Commenting on the announcements, Andy Burnham said: “It’s clear from discussions during Green GB Week that businesses are committed to playing their part in our ambition to achieve a carbon neutral future, ensuring that Greater Manchester is a world-leading greener, cleaner city region, improving the health and quality of life for millions of people and protecting our green spaces and environment for future generations.”

“We need a whole society approach to achieve our aims and the value of business collaboration cannot be emphasised enough. I’m calling on all businesses to take action and be part of Greater Manchester’s plans. Whether it’s reducing single-use plastics or installing solar panels, every business can play their part.”