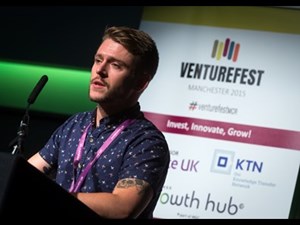 Organised and led by the Greater Manchester Business Growth Hub in partnership with Innovate UK and the Knowledge Transfer Network (KTN), Venturefest brings together the north west’s most exciting innovators, entrepreneurs and investors on 21 September at the Bridgewater Hall in Manchester.

The Venturefest Innovation Showcase gives SMEs with innovative services and products the opportunity to win a unique business support package worth £30,000.

Salford-based Gatorduct manufactures pioneering sustainable ductwork systems that are made from engineered, water resistant and fire retardant corrugated cardboard rather than conventional galvanised steel, which is much more energy-intensive and dependent on increasingly scarce rare metals.

Finally, Extreme Low Energy in Trafford has produced a patent-pending range of low energy end-to-end direct current (DC) based IT infrastructure that can reduce IT-related energy usage by as much as 90 per cent. The company was recognised as Britain’s most innovative small business in 2015 by the government’s Business is GREAT campaign.

Four of the five companies are members of the Business Growth Hub’s Low Carbon Network, a thriving online community of low carbon goods and services suppliers.

The 23 shortlisted businesses pitched their innovations to a panel of experts in July and have now been whittled down to ten finalists, with Extreme Low Energy and Gatorduct making it into the final ten.

In a Dragon’s Den style final, the finalists will pitch their innovations to prominent entrepreneurs, innovators and investors at Venturefest 2016.

The winner will be decided by a live audience vote, with over 700 people in attendance at last year’s event.

Venturefest 2016 will also include keynote speeches from some of the north west’s most influential people, including Sir Howard Bernstein, chief executive at Manchester City Council; Juergen Maier, chief executive at Siemens PLC; Mike Biddle, deputy director at Innovate UK; and Dame Nancy Rothwell, president and vice chancellor at the University of Manchester.

For further information about the event or to register, click here.