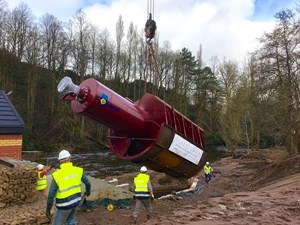 The project will also prevent over 150,000 tonnes of CO2e from entering the atmosphere each year.

The site of the turbine, Stringer’s Weir, was originally built in 1791 at the height of a ‘water war’ between mill owners fighting over access to water. During the early 20th century the weir powered large 5,000hp steam engines.

Henry Reily-Collins, project engineer at Hallidays Hydropower, said: “This has been our most challenging project yet. This hydro scheme had a long history of development attempts by other companies.

“Getting the engineering to work and the finances to stack up was no mean feat, however Hallidays Hydropower excel at value engineering and efficient design and have managed to deliver another renewable energy generator, to time and within budget and as sympathetic to the local environment as possible”.

The company worked closely with the Environment Agency and local stakeholders to ensure the installation was fish-friendly. A ‘fish pass’ installed alongside the turbine provides safe upstream and downstream migration for fish for the first time since the original weir was built in the 18th century.

The project is due for completion in May 2017 and 95 per cent of the electricity produced will be used by the mill on-site.

Posted under General Interest / Energy and Renewables on 27 March 2017