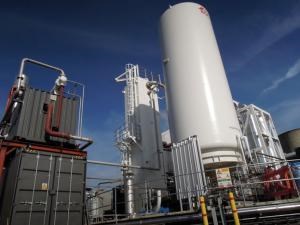 A cutting-edge project in Greater Manchester that uses excess electricity from the grid to turn air into a liquid to store energy has been awarded £1.5 million in funding to expand its operations.

Highview Power Storage has been developing the Liquid Air Energy Storage (LAES) technology next to a landfill gas site in Bury, using waste heat from the nearby gas engines to power the liquid-to-air process.

The technology works by using such waste or excess energy to turn air into a liquid by cooling it to -196°C and storing it in a special tank at low pressure. When power is required, the liquid air is drawn from the tank, reheated and then pumped into a high pressure gas, which can be used to drive an electricity generator.

It is one of the more cutting-edge approaches to energy storage in the UK, which has become a major focus for government funding. Methods of storing energy are increasingly in demand because renewable energy sources such as wind and solar power are only able to generate energy intermittently.

While large-scale batteries are yet to be successfully used at scale, forms of pumped storage are an attractive solution that offer long-range, long-duration storage and flexibility.

However, these usually require a specific geography, such as a reservoir or lake to pump water, whereas LAES can be located anywhere.

The new funding from Innovate UK will be used to create a new hybrid version of Highview’s existing 5MW system in Bury. By adding supercapacitors and flywheels, Highview hopes to end up with a system that can respond to automatic requests for power from the National Grid within one second.

"Our electricity system requires both flexible response and longer duration energy storage. This project will address both these important topics. Battery energy storage has made the headlines recently, but other electricity storage technologies are also of high value.”

Gareth Brett, chief executive of Highview, said: “A hybrid LAES system provides the powerful combination of instant start and long-duration storage and is an important step for Highview as it broadens the range of services which LAES can supply and will help enhance the economic case for its adoption.”