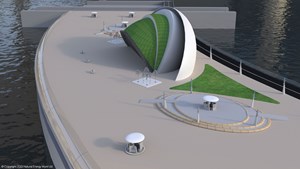 A £200 million proposal to build the UK’s first estuary-based tidal energy power station on the River Wyre in Lancashire has gained momentum after being given a green light by the Duchy of Lancaster.

The project is being managed by Natural Energy Wyre, which hopes to construct a tidal barrage across 600 metres of the River Wyre.

The barrage, which would take three years to build, would have a lifespan of 120 years, create 5,000 jobs and deliver 90MW of electricity capacity – enough to power 50,000 homes.

If constructed, the barrage is also expected to attract up to 600,000 visitors to the region, with leisure facilities and an educational learning centre also planned.

With exclusivity rights now granted by the landowner, the Duchy of Lancaster, and support from Lancashire County Council, Lancaster University and international engineering consultancy Arup, the project can now move forward to raising the £10 million needed to complete a full planning application.

“[It] gives us the green light to move forward with the next stage in developing a clean renewable energy project right here in the North West of the UK”, he said.

“This is great news for all local people, on both sides of the river and beyond, and a real opportunity to be involved in helping the UK become less dependent on imported energy and the burning of fossil fuels.”

However, the project is not without opposition. Tim Melling, senior conservation officer at RSPB, said: “Climate change is the biggest threat to the natural environment so it is vital we invest more in renewable energy. But tidal barrages are not the right option and this proposed scheme on the Wyre would cause major damage to the estuary.

“A barrage would knock the tidal system out of sync and destroy this prime feeding habitat by reducing the size of feeding areas.”

The Government has recently given planning permission to the much larger £1 billion Swansea Bay Tidal Lagoon project – which will have an installed capacity of 320MW when completed – and businesses in the supply chain, such as Greater Manchester-based Roxtec, are moving fast to capitalise on growing opportunities in the sector.

Posted under General Interest on 23 June 2015