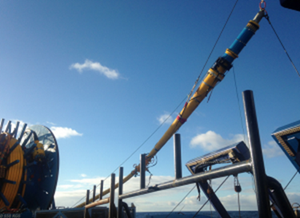 First Subsea, a Lancashire-based subsea connector specialist, has been awarded £130,000 of funding to help pioneer a breakthrough in power connections for offshore wind.

The GROW:Offshore Wind scheme provides Government funding and advice on how English suppliers can tap into the £15 billion manufacturing opportunity of UK offshore wind.

To date, £7 million has been awarded to nearly 900 companies across England.

Its combination of an interface connector to secure connection and a hang-off cable connector to hold the cable in position “gives installation companies the ability to significantly reduce cable installation and mooring costs”, said John Shaw, First Subsea managing director.

“As the offshore wind industry strives to reduce turbine deployment costs, our connector is a major breakthrough in facilitating quicker and safer installations.”

“This is a particularly exciting development,” Shaw added. “New mooring technologies will be key to the success of deploying floating wind farms in deeper waters.”

David Terry, GROW:OffshoreWind advisor, said: “One of our main roles is to unlock the potential of English manufacturers and ensure they are in a position to make the most of the market’s undoubted potential.

“In First Subsea, we have given it the ability to develop new technology that has never been seen in the industry before. This is a fantastic competitive advantage to have and I’m sure will spin-out into even more opportunities for the UK supply chain.”

A recent Government and industry-backed report from the UK Offshore Wind Programme Board found that the cost of energy from UK offshore wind has fallen by almost 11 per cent over the past four years, putting the industry ahead of schedule on its goal to bring costs down to £100/MWh by 2020.