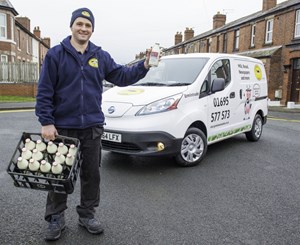 Grimshaw Lane Dairy, based in Ormskirk, is switching its delivery fleet from diesel to electric and is already saving £900 a month after replacing four of its aging diesel vans.

According to Nissan, the vehicles cost as little as two pence per mile to run, on average £1,200 lower than a conventional diesel van over four years.

The lower noise and smoother motion associated with electric vehicles was also a key factor in the company’s decision to switch, due to the early morning timing of its deliveries.

Andrew Brown, managing director at Grimshaw Lane Dairy, described the opportunity to move back towards electric vehicles, a concept pioneered by dairy industry in the latter half of the twentieth century, as a “no brainer”.

“The savings we’re making on fuel have paid for the contract hire on the vans and we’ll be saving on the maintenance too”, he said.

“We’ve effectively got four new vans for what we’d have been spending on fuel.”

Brown added that the company plans to replace its two remaining diesel vehicles as a result of the cost savings.

Last year, the government announced that it will be investing £500 million between 2015 and 2020 to help increase the uptake of ultra-low emission and electric vehicles (ULEVs) across the UK.

Current benefits for qualifying commercial vehicles under the government’s Go Ultra Low scheme include grants to reduce up front cost by up to 25 per cent and the ability to offset 100 per cent of the value as a capital allowance.

Vehicles emitting less than 75g of CO2 per kilometre are also exempt from road tax.