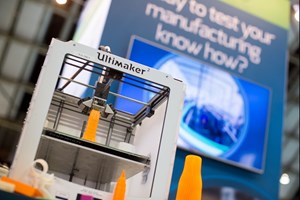 Hundreds of businesses attended the inaugural Industry 4.0 Summit and Factories of the Future Expo in Manchester on 4-5 April to learn about the cutting-edge manufacturing on the horizon.

The inaugural event welcomed an international manufacturing audience, who heard from world leading manufacturers about their journey into the ‘fourth industrial revolution’ while viewing the technology and systems that are digitising the sector.

The event was the first of its kind in the UK and was established to offer manufacturers the opportunity to understand what Industry 4.0 means for the modern factory and the potential impact it can have on productivity and efficiency.

Among the keynote speakers was Mike Blackburn OBE, vice president for strategy at BT Global Services and chairman of the Greater Manchester Local Enterprise Partnership (LEP).

Quoting German chancellor Angela Merkel, who has described Industry 4.0 as the way we “deal quickly with the fusion of the online world and the world of industrial production”, Mike Blackburn said Industry 4.0 was a “profound shift” that could empower businesses to do amazing things with agility, flexibility and speed.

UK manufacturers are being urged to plan for Industry 4.0 in order to keep up with competition overseas in places like Germany, where 80 per cent of manufacturers are planning for their value chain to be substantially ‘digitised’ by 2020.

The trend is not just confined to multinational companies – SME manufacturers are considered central to realising the fourth industrial revolution, but often do not know where to start and have limited budgets.

Manufacturers in Greater Manchester can receive support from the Business Growth Hub.

Companies in the Liverpool City Region can access support through the LCR 4.0 programme, which has already worked with companies to deliver projects ranging from advanced data analytics to developing product prototypes in virtual reality.