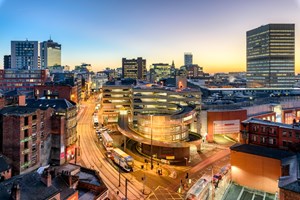 An emissions charging zone for commercial vehicles is being mooted by Greater Manchester officials, but how would that compare with plans being put forward by other English cities?

Greater Manchester is one of a number of towns and cities in the process of drawing up plans to reduce illegal levels of air pollution in their constituencies, following successive court action against the government in recent years.

Although no final decision has yet been made, mayor Andy Burnham revealed in January that officials were “minded to support the introduction of a Greater Manchester-wide Category C Clean Air Zone.”

A Class C Zone would place a penalty charge on commercial light goods vehicles and HGVs, as well as buses and taxis, that do not comply with Euro 6 emissions regulation - which includes most pre-2016 vans and pre-2013 HGVs.

A similar approach is being proposed by Sheffield City Council, which is planning a ‘C+’ Zone with additional measures such as controlled parking zones and extra electric vehicle charging infrastructure.

Derby City Council does not believe it needs a Clean Air Zone and instead is proposing to introduce new traffic management measures and incentives for switching to a low emission vehicle.

Leeds City Council has already had its decision to introduce a softer Class B Zone - which will only charge non-compliant HGVs, buses and taxis - approved by government.

Nottingham City Council has also had its plans approved. The city does not require a Clean Air Zone to ensure compliance with air quality limits and will instead retrofit buses, support low emission taxis and convert its own high-polluting vehicles, such as bin lorries, to electric.

Southampton City Council also does not require a Clean Air Zone. It has proposed to introduce other measures, including opportunities for businesses to trial freight consolidation to reduce HGV trips, and an accreditation scheme for HGV operators so businesses can identify the least polluting service.

London, unsurprisingly, has had to be more ambitious than most cities and already has an Ultra Low Emission Zone (ULEZ) due to come into force in April 2019. Vehicles that do not meet minimum standards within the zone will have to pay £12.50 a day, or £100 a day for heavier vehicles, on top of the city’s existing congestion charge.

Posted under General Interest on 6 February 2019