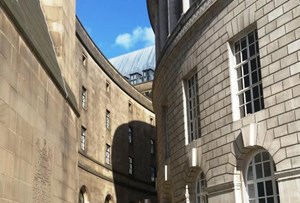 By simultaneously generating heat and power on-site, CHP can be up to twice as efficient as conventional power generation and can cut energy costs by up to 40 per cent over grid-sourced electricity supply.

As well as helping the buildings achieve a BREEAM excellent rating, it will also reduce their CO2 emissions by 710 tonnes per year – the same as taking 237 cars off the road.

The Council is able to alter usage of the two tri-generation engines to maximise operating hours of the system overnight when electrical demand is lower. Thermal stores have also been installed into chilled and hot water systems to allow night-time charging, while the cooling potential of the system is being used to provide 24 hour chilling to ICT communications rooms.

In addition, the system has been designed to operate in ‘island mode’, so in the event of an electrical network failure it can be switched to operate independently from the main grid, providing emergency power to maintain critical public services.

To operate this way, the system would normally require a ‘heat rejection’ radiator. However, space constraints in the buildings made this impossible, and instead the heat rejection facility has been linked to an existing absorption chiller radiator, thereby making smart use of limited space.

“The [CHP] units are operating at around 90 per cent efficiency, helping to create cleaner and affordable energy for the city. This project demonstrates the suitability of CHP for retrofit projects.”

The project is the first phase of the proposed Greater Manchester Heat Network programme, which will provide a low carbon district heating supply for four city districts: Manchester, Bury, Oldham and Stockport.