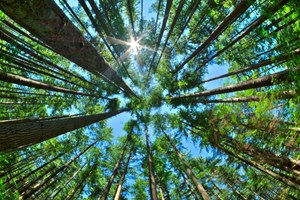 The data from the Office for National Statistics also shows that green goods and services were responsible for 335,000 jobs by 2015 - a rise of more than 30,000 in five years.

Environmental goods and services is defined as areas of the economy engaged in environmental protection and resource management. This includes a wide range of sectors like waste and recycling, water, energy saving, consultancy, the production of renewable energy and industrial environmental equipment.

Waste management was the single largest contributor to the economy throughout the period, but the strongest growth was in renewable energy where growth nearly trebled in five years.

Separate research looking specifically at the low carbon and renewable energy sector, which includes activities outside the scope of environmental goods and services, revealed earlier this year that it was worth £42.6 billion in 2016 - five per cent higher than in 2015.

Over two-thirds of these jobs are in energy efficient products, which accounts for almost half of the total turnover in the low carbon and renewable energy sector.

Posted under Environmental Technologies and Renewable Energy on 30 May 2018