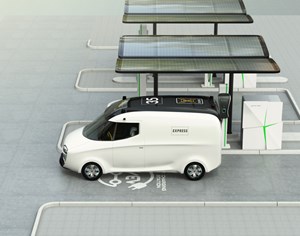 New research claims businesses could get a slice of £14 billion in fuel savings by switching their fleets to electric, while the tax break for electric vans has been extended to 2021.

Financial services firm Hitachi Capital estimates that £14 billion would be the total fuel savings if every business switched its vans and HGVs to electric alternatives.

A survey of 149 fleet professionals also revealed that 82 per cent believed it was important to move towards alternatively fuelled vehicles (AFVs).

Commenting on the findings of the report, Professor Jonathan Pinkse, a professor at Alliance Manchester Business School at the University of Manchester, said: “While it is clear that there are still a great many barriers for adopting AFVs, even now the advantages far outweigh the disadvantages.

“This is a truly exciting moment for AFVs. We are only seeing the tip of the iceberg in terms of the innovation and benefits they are set to bring to businesses and consumers alike in the future.”

Interest in electric vehicles is continuing to soar, with the low carbon car market growing by more than a third in 2017.

The rollout of charging infrastructure is keeping pace, with well over 6,000 charging points being installed across the country in the last 12 months.

The government has now extended the Capital Allowance tax break for new electric vans to 2021, which allows businesses to deduct 100 per cent of the cost against taxable profits. The 100 per cent allowance for electric charging points currently expires in 2019.

In contrast, a damaged reputation and incoming air quality measures in many towns and cities mean that diesel vehicles are less attractive than ever. Sales plummeted by nearly 20 per cent in 2017, enough to cause the total number of car sales to drop for the first time since 2011.

Toyota is the latest car manufacturer to join Volvo in pledging to introduce electric or hybrid versions of all its cars, by 2025.

Others, including Ford, Nissan, Kia, Renault, Volkswagen, Mercedes-Benz and BMW, have introduced scrappage schemes to take back older diesel models in return for discounted new ones.

Posted under Fuel Efficiency on 31 January 2018