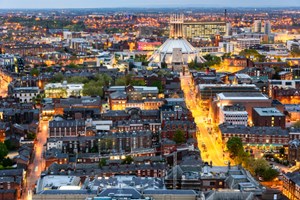 A new report has set out the actions the metro mayors of Liverpool City Region and Greater Manchester should take to make their regions greener, cleaner and more liveable.

Greater Manchester and the Liverpool City Region were two of six city regions across the country that elected new metro mayors in May.

Green Alliance, the group that led on the report alongside the National Trust and other environmental bodies, believes that the strategic powers wielded by the new mayors represent a unique opportunity for green leadership.

“Devolution aims to unlock the potential of England's cities, but metro mayors will be the key,” said Tamsin Cooper, acting director of Green Alliance.

“Cities have to be resilient to climate change and grow their low carbon economies if they are to thrive and grow in the long term. The new metro mayors have an historic opportunity to use their new status to accelerate environmental action, creating sustainable city regions around the country.”

The report includes a Green City Regions Index, which measures each of the six city regions against 17 different green indicators, including air quality, energy efficiency and environmental protection.

According to the report, Liverpool City Region performs well on the natural environment and has welcome ambitions on water quality.

However, it has the highest number of deaths from particular air pollution and the poorest electric vehicle infrastructure out of the six city regions  which means new mayor Steve Rotherham should focus on these areas, Green Alliance argues.

Meanwhile, Greater Manchester is already making progress on air pollution but new mayor Andy Burnham is encouraged to ensure the region’s spatial framework for housing and business developments does not unduly impact the natural environment.

Posted under General Interest on 9 May 2017