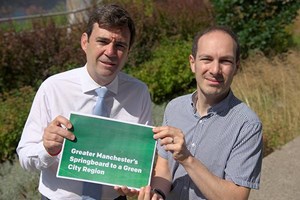 Greater Manchester mayor Andy Burnham has launched a new plan to make the city region one of the leading green cities in Europe, including a “globally leading” aim to be carbon neutral by 2038.

The Springboard plan follows on from the city region’s inaugural Green Summit in March, where policymakers collected feedback from over 1,000 individuals and organisations.

The headline 2038 target is more than a decade earlier than previously set out and, in a first for a UK city, is based on scientific advice on what the city’s ‘fair contribution’ should be to tackle global warming.

The target requires the city region to achieve an ambitious 15 per cent cut in emissions year-on-year on average. Among other elements, this will include:

• Cutting waste generation by 20 per cent

• Transitioning two thirds of cars to zero emission models by 2030.

The plan also sets out 17 actions to be completed before the next Green Summit in March 2019, including discussions on how to create a ‘Greater Manchester Environment Fund’ and consulting on a Resource Strategy to set out what the transition to a circular economy means for businesses.

Andy Burnham said: “The science is clear on the steps we need to take to become carbon neutral, and some of these are very challenging. But our ambitions are high and we need communities and businesses to work with us to make this happen.”

Cllr Alex Ganotis, Greater Manchester green city region lead, added: It is clear that these ambitious plans can only be achieved if we work together to deliver them. Over 200 pledges were made at the Green Summit and I call on others to get involved too.

To get involved in the process ahead of the next Summit, contact LCH@greatermanchester-ca.gov.uk.

Posted under General Interest on 8 August 2018