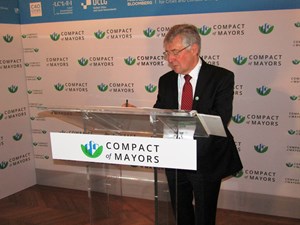 Greater Manchester Mayor, Tony Lloyd, has announced that the city will contribute to a global “Compact of Mayors” commitment to reduce carbon emissions by 500 million tonnes a year by 2020.

The Compact of Mayors is a global coalition of 396 towns and cities pledging to take action to reduce local emissions, enhance resilience to climate change and track their progress transparently.

The signatories represent over 340 million people and are responsible for around 5 per cent of global emissions.

According to the group, the collective impact of their commitments has the potential to reduce global emissions by over 2.6 gigatonnes (Gt) by 2020 – over half of the global potential for urban emissions reductions. To put this into perspective, the UK’s total annual emissions in 2013 were nearly 0.6Gt.

Speaking at an historic Climate Summit for Local Leaders during the UN climate change conference in Paris on 4 December, Tony Lloyd emphasised the role of cities like Greater Manchester in tackling climate change and supporting international action.

“Today, nearly 400 mayors from around the world united as signatories of the Compact of Mayors and announced that together we will reduce our greenhouse gas emissions by 0.5 GtCO2e (gigatonnes of carbon dioxide equivalent) per year from business as usual levels by 2020, and by 0.74 GtCO2e annually by 2030”, he said.

“The Compact of Mayors reinforces our city’s commitment to its people, its businesses and the environment.

“Through the Compact, we are strengthening our pledge to reduce local greenhouse gas emissions, create ambitious climate targets, track progress and enhance Greater Manchester’s climate resilience. With consistent, public reporting of our city’s climate data, we will show how our actions can effect real change.”

The pledge recognised the need for “significant action” and the role of “every individual and organisation in reducing carbon emissions” in Greater Manchester.