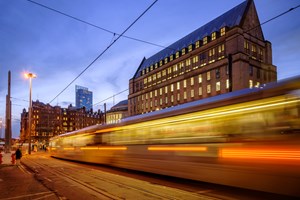 Greater Manchester has unveiled a new EU-funded plan to help transform itself into a ‘world-leading’ urban green city region.

Announced by Greater Manchester mayor Andy Burnham on 14 June, the £21 million of European Regional Development Fund money will go towards innovative projects that reduce carbon emissions in the city year-on-year.

The Sustainable Urban Development Plan will put into action some of the aims from the Greater Manchester Climate Change and Low Emissions Implementation Plan.

Key goals in the Implementation Plan include reducing carbon emissions by 48 per cent by 2020 against 1990 levels, prioritising low carbon energy within homes, buildings and transport, and creating a low carbon economy.

“Climate change and air quality are two of the biggest issues facing us as a city region and for the UK as a member of the international community. We can no longer ignore the serious damage our carbon emissions are having to people’s health and the world we live in”, Andy Burnham said.

The city has made progress on its green ambitions in the last year, having become one of only 50 global cities to achieve compliance with the Compact of Mayors initiative in 2016.

“Our economy will be strengthened from investing in pioneering green technologies which will bring more jobs to Greater Manchester. And by reducing our energy usage across Greater Manchester we will reduce our overall energy costs, making our city region wealthier and healthier”, the mayor added.