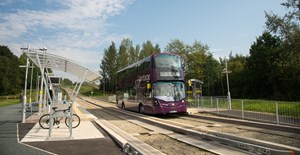 Greater Manchester’s bus operators will invest in 70 new electric buses after receiving a multi-million pound funding boost from government, giving the city one of largest e-bus fleets in Europe.

Transport for Greater Manchester (TfGM) and several other private bus operators in the city region will together receive nearly a third of a £48 million government funding pot for electric buses.

TfGM successfully bid for £5.4 million to part-fund 23 new electric buses and charging infrastructure, while Stagecoach Manchester, First Bus Manchester and Manchester Community Transport have been awarded funding for a further 47.

There are nearly 2,000 buses running in Greater Manchester, but only around 250 currently have the most environmentally-efficient Euro VI engines.

Greater Manchester major Andy Burnham said: “Some buses contribute heavily to poor air quality, a problem that affects us all - but in particular the poorest and most vulnerable in society - and which contributes to the equivalent of 1,200 deaths every year in Greater Manchester.

“Buses have an essential role to play in that, which is why we’re working towards having a zero-emission bus fleet.”

Stagecoach Manchester’s £6.9 million funding award was the largest single award outside London and will contribute towards purchasing 32 Enviro400 EV City buses over the next two years.

The buses have a range of up to 190 miles and are built by UK bus manufacturer Alexander Dennis. The new fleet will offer a 62 per cent improvement in CO2 emissions over the latest low carbon emission buses on Manchester’s streets and cut harmful nitrogen dioxide (NO2) emissions by 9 per cent, as well as saving 920,000 litres of diesel a year.