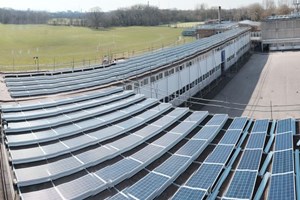 The largest solar array to be installed on a school in the UK has been completed in Greater Manchester under a purchase power agreement (PPA) and is expected to save around £2.1 million over its lifetime.

The 430kW, 1,700-panel array at Wellacre Academy in Flixton has been installed under a PPA with London-based operator, Eden Sustainable, meaning that the school paid no upfront cost and has agreed to purchase the electricity generated at a fixed price.

According to the school, its electricity bill over the next 25 years would have been over £3 million in a business-as-usual scenario. However, the PPA is expected to reduce the cost to less than £1 million. Savings of up to £25,000 are expected in the first year alone.

The school normally uses 414MWh of electricity in a year, which will now be met almost entirely by solar.

Speaking to Solar Power Portal, Christine Ellis, business and finance director at Wellacre Academy, said: “We are hoping to halve our energy bills with electricity fixed at 6p [per kWh] with increases in line with the retail price index.

“One thing everybody knows is that the price of electricity will carry on going up, so fixing the price now is great for Wallacre moving forward. We will be saving tens of thousands [of pounds] every year.”

“We are doing similar deals for scores and scores of businesses and medium-sized firms and even household names can see a return on their bottom line by fitting panels.”

PPAs are likely to become more popular following proposed changes to the way business rates will be calculated from 2017.

Under current plans, businesses with solar panels installed could see their business rates rise due to the rateable value of their assets increasing.

Following criticism from the solar industry, the Treasury is now reviewing how the proposals will affect businesses with solar panels and is expected to take action.

Whatever the outcome of the review, businesses that have installed solar arrays under a PPA will be unaffected because the rateable value is not applicable to assets owned by a third party.