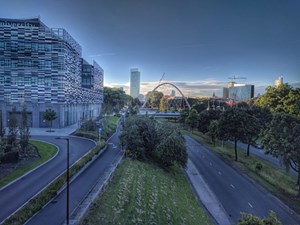 New analysis has revealed the full extent of Greater Manchester air quality problem, with well over a hundred stretches of road set to breach legal limits for years unless urgent action is taken.

Last year, a national air quality plan identified 11 locations in Greater Manchester that were estimated to still be exceeding legal pollution limits beyond 2020. However, new modelling shows that the problem is much more widespread than initially thought - affecting 152 locations across the city region.

The new analysis is being considered by the Greater Manchester Combined Authority (GMCA) as it explores possible solutions for a Clean Air Plan, which will be published for public consultation later this year.

A charging zone for the most polluting vehicles is reportedly under consideration, along with increasing public transport capacity, encouraging the use of electric vehicles or alternative fuels and incentivising travel outside of peak hours.

In the meantime, Greater Manchester has launched a new CleanAirGM website to raise awareness of the serious impacts of air pollution and how residents, businesses and other organisations can work together to tackle it.

Roadside emissions - particularly from diesel vehicles - are the primary cause of NO2 and particulate pollution, which is linked to a wide range of health problems and contribute to an estimated 1,200 deaths a year in Greater Manchester alone.

‘Doing nothing not an option’

Cllr Alex Ganotis, green city region lead at GMCA, said: “In developing our Clean Air Plan, Greater Manchester is following a strictly defined process set out by government. I want to be clear that a congestion charge is not being considered as part of this process, but we do have to consider how we ensure that dirty vehicles are not polluting our air. This is a major public health problem.”

Cllr Angeliki Stogia, executive member for environment, planning and transport for Manchester City Council, added: "Doing nothing to improve this situation is not an option. Not only are local authorities responsible for ensuring air quality is legally compliant but crucially we have a duty to help protect the health of Manchester people and save lives.

"We need to have a conversation with Manchester people about the problem and potential solutions before taking any decisions. But we do need to act sooner rather than later to radically improve air quality.”