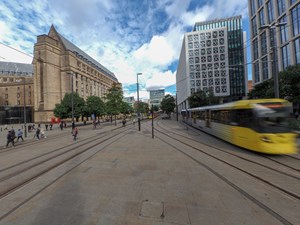 Greater Manchester’s leaders have officially tabled a plan to introduce the largest Clean Air Zone outside of London, as part of a package of measures to tackle harmful air pollution.

The GM Clean Air Plan is described as an “unprecedented upgrade programme” to clean up the city region's polluted air, which is estimated to cause the equivalent of 1,200 deaths a year.

Like other cities, the plan is to implement a Clean Air Zone that will penalise non-compliant vehicles. However, Greater Manchester’s proposal would cover all ten of its local authorities - a population of nearly three million people across 500 square miles. Inside the zone, owners of high-polluting, non-compliant HGVs, buses, taxis, private hire vehicles, light goods vehicles and minibuses would have to pay a daily penalty.

Despite vocal opposition from some environment and community groups, private cars would be exempt. Greater Manchester Combined Authority (GMCA) explained that penalising the 285,000 non-compliant cars registered in the city region would not reduce air pollution levels any quicker, and would disproportionately affect deprived communities.

Mayor of Greater Manchester, Andy Burnham, said: “This is a balanced package of measures to clean up our air without punishing businesses or deprived communities.

“But we need government to guarantee the right level of funding to help us tackle the scale of the problem without damaging our local economies.”

The business case proposes a £116 million government funding pot for supporting businesses, including a £59 million ‘Clean Freight Fund’ to provide local small businesses, sole traders and the voluntary sector with a discount on a compliant vehicle when scrapping their old one.

Similar funds are proposed for taxis and private hire vehicles (£28 million) and buses (£29 million), as well as £25 million to nearly treble the size of Greater Manchester’s electric charging network. Also mooted is a loan scheme to provide supporting finance at preferential rates.

The outline business case is due to submitted to government at the end of March. Once approved, a final business case will be developed by the end of 2019 following public consultation. To find out more and register for updates, visit www.CleanAirGM.com.

Posted under General Interest on 6 March 2019