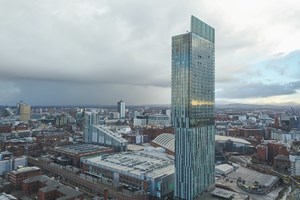 Greater Manchester was placed number one out of England’s 38 LEPs in the Fit for the Future II report, the second national review supported by the government’s Department for Business, Energy and Industrial Strategy (BEIS).

The scoring was based on information from LEP strategies, commitments, websites and interviews with key individuals. It covers both measures that mitigate climate change, by cutting greenhouse gas emissions, and adapt to it, by lowering the risks posed by extreme weather and other climate impacts.

Top of the pack

It is also taking climate change adaptation measures as party to the Global Covenant of Mayors and EU RESIN project, while Greater Manchester mayor Andy Burnham has arranged a ‘Green Summit’, to be held on 21 March 2018.

Other local schemes highlighted in the report include the city region’s Business Growth Hub with support for businesses, its successful domestic smart energy pilot, and wider investments in district heating and LED lighting.