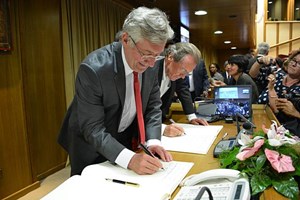 Tony Lloyd, interim mayor of Greater Manchester, attended a global mayoral summit at the Vatican in July to highlight the role of cities in tackling climate change.

Following the Pope’s globally celebrated encyclical, On Care of our Common Home, published in June 2015, the Vatican invited mayors from the world’s largest cities to a two-day conference aimed at highlighting the role of cities in tackling climate change.

The 192-page encyclical highlighted the moral as well as economic imperatives for transitioning to a more sustainable society, with the Pope arguing that the planet is “being plundered because of short-sighted approaches to the economy, commerce and production”.

According to the Vatican, the main objective of the conference was to provide “a crucial opportunity for city leaders to start to consider clear, quantifiable commitments which demonstrate their dedication to a fairer, more sustainable world” ahead of landmark UN climate change negotiations in Paris.

Over 60 mayors attended the event, with Tony Lloyd (pictured) representing Greater Manchester, which targets a 48 per cent cut to its emissions by 2020 against 1990 levels.

‘We must take action’

“This conference echoed the voice of millions of people around the world that climate change threatens to undermine our ways of life in ways we cannot predict”, he said.

“The impacts of rising food prices, rising sea levels, dangerous weather change and refugees on a huge scale and more will hit people hard right across the globe. Here in Greater Manchester we can't stand idly by and wait for this to happen – we must take action. When religious leaders join climate change scientists to raise their concern, both morality and common sense demand determined action.”

Tony Lloyd was joined by Bristol mayor, George Ferguson, as the only UK representatives at the conference, with London mayor Boris Johnson a notable absentee.

“I was really pleased that so many leaders from across the world joined me in signing the declaration here in Rome to work for a safer, cleaner world”, Lloyd added.

Posted under General Interest on 3 August 2015