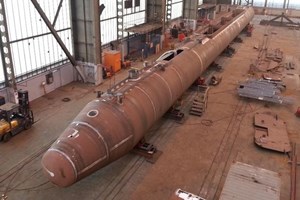 Safety seal manufacturer, Roxtec, is playing a part in the manufacture of the world’s largest and most powerful tidal energy turbine, with tidal power rising to prominence in the UK’s energy future.

The Bury-based company has provided waterproof sealing solutions in a deal with Scotrenewables Tidal Power Limited, which has led the manufacture of a 65m, 550 tonne floating turbine at sites in Orkney and Belfast.

When complete, the SR2000 turbine will have a generating capacity of 2MW.

The turbine will be launched later this year as part of a demonstration project at the European Marine Energy Centre (EMEC) in Orkney, before being offered to the global tidal industry with the lowest cost of energy in the sector.

Roxtec is the latest example of a long line of businesses that are capitalising on the growth of the renewable energy industry by joining the supply chain.

Roxtec’s watertight seals have been installed on the turbine to protect control systems from flooding over its 20-year lifespan.

The marine and tidal energy sector, for a long time considered the less viable cousin of the more mainstream wind and solar technology sectors, is experiencing significant investment in the UK following government backing of plans to build the world’s first tidal lagoon in Swansea Bay.

The 11.5km2 man-made lagoon in Swansea Bay will capture incoming and outgoing tides behind sea walls and use the weight of the water to power a number of turbines.

The £1 billion project, which was given the green light in the Government’s 2015 Budget announcement, will have a generating capacity of 320MW and will be constructed in time to be connected with the grid in 2018.

Tidal Lagoon Power, the developer behind the project, hopes the Swansea Bay Tidal Lagoon will be the first of six on the West Coast of England and Wales, which could collectively power up to 8 per cent of the UK’s electricity needs.

Mark Shorrock, chief executive at Tidal Lagoon Power, said that plans are in place to ensure that British suppliers will be ensured a central role in the project.

“Tidal lagoons will employ British industry to harness a British natural resource and return profits to British institutions. We are now well placed to meet the targets we set ourselves for 50 per cent of the capital expenditure for the Swansea Bay Tidal Lagoon to stay in Wales, rising to 65% for the UK as a whole”, he said.

“The project will lay the strongest possible foundations for a brand new industry in which Britain can lead the world.”

Companies interested in entering the supply chain can express an interest by clicking here.