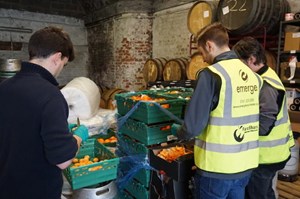 The Marble Brewery in Manchester has brewed up a beer made with waste fruit diverted from landfill by recycling charity EMERGE - with a donation back to the charity for each beer sold.

The brewery has created a Grapefruit and Clementine Berliner Weisse beer named ‘The Three Rs’ in honour of EMERGE, which runs a suite of recycling, food waste and wood waste services.

The ingredients for the beer were surplus to the needs of EMERGE’s FareShare food redistribution network and would have gone to landfill without the brewery’s intervention.

The final product was launched on 11 May and 25p from each sale at the brewery’s Marble Arch pub will be donated back to EMERGE to support its charitable projects in Manchester.

Speaking to the I Love MCR website, brewery owner Jan Rogers said: “When we learnt of the fantastic work that the team at EMERGE are doing right across our local area, we committed to help in whatever way we could.

“Hopefully this beer, and the donations, can go some way to repaying all of the good that they have done for this city.”

Food waste reduction and recycling by businesses is now starting to become mainstream, with up to £300 million in savings up for grabs in the grocery supply chain alone.

Environmental-themed beers are also seemingly on the rise. Independent craft brewer BrewDog launched a climate change themed beer in 2017, with all proceeds donated to environmental charity 10:10.