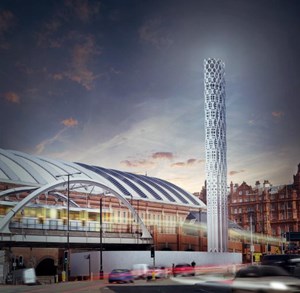 Manchester City Council has won £2.87 million from government for its Civic Quarter Heat Network, which will connect several iconic city centre buildings and include a 40m ‘Tower of Light’.

The council was named as one of nine winners of funding earlier in 2017 as part of a £320 million national heat networks programme.

Unlike conventional heating systems where individual properties have their own boilers, heat networks link multiple buildings in an area to a single heat source connected by underground pipes.

They are already popular in parts of Europe, especially in Scandinavian countries like Denmark, where they provide 60 per cent of the country’s space and water heating.

It will be powered from an energy centre that includes two 2.7MW combined heat and power (CHP) units, while a 40m ‘Tower of Light’ flue designed by award-winning architects will become a permanent addition to Manchester’s skyline.

Phil Mottershead, account director for Vitali Energi, which will deliver and maintain the scheme, said: “This is a very exciting time for Manchester and the start of what will be one of the UK’s major city centre heat networks.

“The scheme will continue to grow and expand, offering low carbon heating and more affordable energy to local businesses at the heart of the city.”

The new grant ensures the council will meet the remainder of the investment required for the 30-year project, which will become cost-neutral in time.

"The council is fully committed to improving air quality and the environmental quality and attractiveness of the city, and we believe this flagship project will make a significant contribution to achieving those ambitions”, she added.

Construction is expected to start in spring 2018.