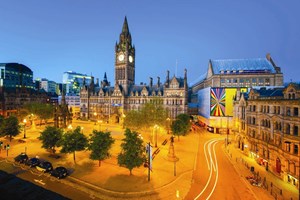 The Manchester Climate Change Agency, which is leading the city’s progress towards reducing net emissions to zero by 2050, will host its annual conference on 10 July 2017.

In December 2016 the agency launched a new strategy for the city built on the views of people, organisations and businesses.

The ‘Vision 2050’ sets out a plan to transition to a “thriving, zero carbon, zero waste, climate resilient city” where “residents, public, private and third sector organisations are actively contributing”.

To remain consistent with the international Paris Agreement on climate change, Manchester will follow five-year implementation plans that will gradually ratchet up action.

Gavin Elliot, chair of the agency, said: “Action on climate change needs to be at the heart of our plans and actions over the coming decades if we are to be home to residents leading happy and healthy lives, and businesses enjoying success as part of a global low carbon economy.”

The 2017 annual conference will provide an update on progress, including what businesses in Manchester have achieved in the last year - particularly through the fully-funded support on offer from Greater Manchester's Business Growth Hub.

The conference will be held at the Royal Exchange Theatre in Manchester city centre on 10 July, 7.30-8.15pm. For more information, click here.