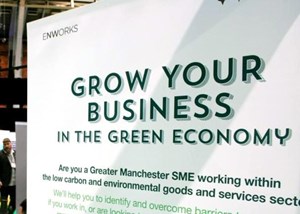 In our final newsletter of 2014, we would like to wish you a Happy Christmas and New Year, highlight some success stories from the year and outline what’s in store for 2015.

Most importantly, we want to say thank you for subscribing to ENWORKS Green Intelligence in 2014. We will be taking a short break over the festive period, but do not fear; our next newsletter will be in your inbox on 7 January 2015.

If you would like to re-visit any of the 200+ stories we published in 2014, you can find them in our searchable News Library.

2014 marked a new milestone for ENWORKS, after we passed £100 million in annual resource efficiency savings identified for SMEs.

Our new fully-funded business support service, Green Growth, which is delivered through the Business Growth Hub for Greater Manchester SMEs, also launched this year and has already supported 180 businesses.

In the process, the service has identified annual savings of £3.5 million and over 15,000 tonnes of CO2e, as well as safeguarding or generating sales to the value of £9 million.

Green Growth’s success stories cover a host of different sectors, from manufacturing to market research, with a small selection outlined below.

Thomas Storey, a steel fabrication manufacturer, is saving £49,000 and 243 tonnes of CO2e a year, as well as achieving zero waste to landfill, after resource efficiency support with air compressors, waste contract, electricity supply and lighting.

Astra Signs, a sign manufacturer in Manchester, has reduced transit packaging costs by over 70 per cent, general waste costs by 20 per cent and electricity costs by 12 per cent, while Beldam Crossley, a manufacturer of industrial sealing technologies, is saving £4,400 and 23 tonnes of CO2e a year, with another £8,600 and 25 tonnes of CO2e in the pipeline.

A number of businesses have also increased sales after resource efficiency support, including Oldham-based Ribble Packaging, which gained new business by achieving Forest Stewardship Council (FSC) certification, and DJS Research, a market research company in Stockport that won new sales over £130,000 after support with their environmental policy.

Meanwhile, Utilitri, a solar PV firm in Wigan, and White Recycling, a waste management firm in Salford, are creating jobs and sales thanks to marketing support from Green Growth’s low carbon sector programme.

Global Heatsave, an insulation and building technologies installer based in Stockport, is also benefitting from low carbon support to develop an innovative idea to reduce energy consumption in the drinks and hospitality sector.

Green Growth’s ability to link opportunities identified by its resource efficiency programme with suppliers on its low carbon sector programme has also proved fruitful for companies on both sides.

2015 is already set to be an important year for the green business agenda, with the General Election likely to influence the low carbon market and a new legally-binding international agreement on climate change expected to be agreed at the upcoming United Nations climate conference in Paris.

Closer to home, the New Year will also see two new online services being launched alongside Green Intelligence: our Low Carbon Network, Greater Manchester’s official virtual hub for companies in the low carbon and environmental goods and services (LCEGS) sector, and the Green Growth Pledge, a new initiative that gives businesses a platform to commit to ready-made actions to reduce their environmental impact.

Both services are free to join and will be publicised more widely from January.

If you have any comments about Green Intelligence, or have suggestions for particular  issues or topics for 2015, please feel free to send any feedback to info@enworks.com.

Finally, from all the team at ENWORKS, we would like to wish you all the best for a successful, low carbon and resource efficient 2015!

Posted under General Interest on 10 December 2014