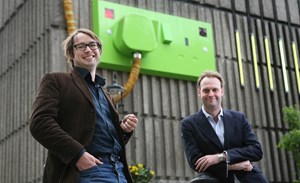 The London-based firm announced the move on the same day it secured a further £1.5 million from Tokyo’s largest utility and venture capital investors to pilot its products in Japan.

The company, which is also planning trials in Europe and the US in 2017, aims to install 50,000 of its compact lithium ion phosphate storage batteries in UK properties by 2020.

The wall-mounted batteries are AC-coupled, so they can use smart tariffs to import electricity from the grid at the cheapest times of the day.

Moixa also aims to manage a further 50,000 batteries by working with their owners to aggregate them into a ‘virtual power plant’ for the grid, a concept that is also being developed by Salford-based Upside Energy.

The £1 million funding from Greater Manchester Combined Authority will support the development of a new regional sales and delivery centre in Manchester, which will have a particular focus on deploying storage units integrated with solar systems on social housing.

“We are developing solar plus storage solutions for social housing that will help councils tackle fuel poverty and we look forward to collaborating with Greater Manchester and supporting the low carbon energy transition in the Northern Powerhouse region.”

The company plans to have 20 employees based at the new facility within a year, with long-term plans to reach 60 staff.

Energy storage is fast-emerging as the next key energy breakthrough for businesses.

Manchester City FC is just one of the latest companies to enter the fray, having signed an energy storage deal with power management firm Eaton in April 2017.