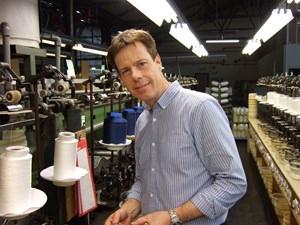 Danfield Ltd, a textiles bobbin manufacturer, has made a number of energy efficiency improvements to its factory and manufacturing equipment, saving thousands of pounds in the process.

The Leigh-based family business manufactures cocoon bobbins for the high-end quilting and embroidery industry. Having grown from humble beginnings in 1965 it is now a market leader in textiles manufacturing; the world’s only truly specialist provider of bobbins.

To achieve its environmental goals of minimising energy consumption and impact on the environment whilst improving profitability, Danfield has been receiving expert resource efficiency support from the Business Growth Hub’s Green Growth service.

“Although environmental concerns have long been on our radar, emerging from a recession and being faced with ever increasing energy costs has made resource efficiency a priority issue for us,” said Stuart Forshaw, director at Danfield (pictured).

In the last year the company has made significant progress after Green Growth environmental business advisor, Claire Scott, helped to identify a range of measures to improve energy efficiency. Some involved upfront investment, but many were simple efficiencies that could be implemented at no additional cost.

For example, when small leaks were found in Danfield’s compressed air system, the company was able to fix them at no cost, saving them £667 a year in the process.

Claire Scott also undertook a thermal imaging survey on site, discovering significant heat losses from Danfield’s domestic heating boiler and hot water pipework. The company has now replaced their boiler, is taking measures to better insulate pipework around the site, and is set to make impressive energy savings as a result.

“While we’ve read government guidance about the benefits of insulating pipe work, these documents are often quite technical and not particularly meaningful to us”, Forshaw added.

“The images from the thermal camera survey were incredibly powerful in showing exactly where and how much heat we were losing.”

Danfield is also in the process of replacing its older fluorescent tube lighting with newer energy efficient alternatives in a move that will save in excess of £1,000 a year when completed.

However, by far its largest saving comes from improvements to its manufacturing equipment. By installing power inverters onto its bobbin winding benches and other motors, the business is set to save £11,200 and 68 tonnes of carbon a year.

All the upfront costs for installing these inverters will be paid back in a matter of just a few months.

Green Growth support is delivered by ENWORKS as part of the Business Growth Hub. To learn more, or find other success stories, visit the website.

Posted under General Interest on 12 May 2015