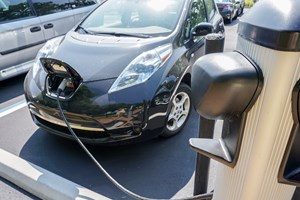 Carmaker Nissan has claimed that there will be more electric charging stations than petrol stations in the UK within four years, with electric vehicle (EV) registrations continuing to rocket upwards.

The claim is based on research showing a trend of increasing numbers of EV charging stations and falling numbers of traditional petrol stations.

According to the Nissan, since December 2005 there has been an average decrease of 129 petrol stations a year. In contrast, there are now around 4,100 public EV charging locations in the UK despite there only being a few hundred as recently as 2011.

The growing infrastructure for EVs is matched by the rocketing demand for plug-in vehicles. The UK aims to be at the forefront of both automated and electric vehicles in future years.

The first half of 2016 saw nearly 20,000 EVs registered in the UK, equating to nearly five a day. This is more than 30 per cent higher than the first six months of 2015, while the April to June 2016 period marked the 22nd consecutive quarterly rise in sales.

Businesses make up nearly three quarters of the EV registrations for 2016 so far.

Edward Jones, EV manager of Nissan Motor (GB), said: “As EV sales take off, the charging infrastructure is keeping pace and paving the way for convenient all-electric driving. Combine that with constant improvements in our battery performance and we believe the tipping point for mass EV uptake is upon us.

“As with similar breakthrough technologies, the adoption of electric vehicles should follow an ‘S-curve’ of demand. A gradual uptake from early adopters accelerates to a groundswell of consumers buying electric vehicles just as they would any other powertrain.”

Commenting on the record number of vehicle registrations in 2016, John Hayes, transport minister, said: “We want to make the UK a world leader in electric vehicle uptake and manufacture, to ensure that by 2050 every car and van on our roads is a zero emission vehicle.

“We are backing this with one of the most comprehensive support packages in the world, with more than £600 million of government investment to help grow the UK market.”

Poppy Welch, head of the government-backed Go Ultra Low campaign, added: “Since the introduction of the Plug-In Car Grant in 2011 the variety of electric models has expanded significantly, notably so in the past two years, giving motorists more choice than ever before.”