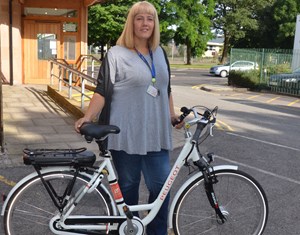 Electric bikes are being loaned to Greater Manchester businesses for free in a bid to get more commuters to cycle to work.

Transport for Greater Manchester (TfGM) has made a fleet of 21 ‘eBikes’ available to businesses as part of its Bikes for Business scheme, which it has been running since 2012.

The scheme encourages businesses to help their employees trial cycling with a view to increasing both the number of commuters cycling to work and also trips made during office hours by bike.

The new eBikes allow battery-assisted pedalling, making cycling much easier for people who are not used to cycling regularly.

Cllr Chris Paul, TfGM committee cycling champion, said: “Cycling is a healthy, affordable and sustainable travel choice and this exciting scheme gives more people the opportunity to give cycling a go, in particular those who may be put off from cycling by the thought of taking on hills or longer journeys.

“We’re aiming to change Greater Manchester's travel culture and increase cycling, with a target of 10 per cent of journeys being made by bike in the region by 2025.

“Initiatives like this are a great way to help us move closer to that target and get more people in the saddle.”

Manchester-headquartered Great Places Housing Group was one of the first organisations to sign up to the scheme and use eBikes.

Sarah Riley, community development coordinator at Great Places Housing Group (pictured), said: “As an organisation we pride ourselves on sustainability and healthy living, so the eBike programme was a great opportunity to promote more environmentally friendly travel choices.

“The eBike makes it really easy to cycle short journeys, making the transition from car to bike far more manageable and enjoyable.”

In May, Greater Manchester was awarded £2.5 million by the Department of Transport to promote cycling and other green forms of transport across the city region.