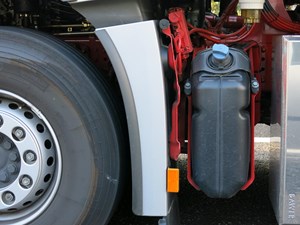 A lorry operator has been hit with a five-year operating ban after being found guilty of evading emissions standards by illegally installing ‘defeat devices’ to its vehicles.

Last year the Driver and Vehicle Standards Agency (DVSA) brought in on-the-spot roadside checks across the country in an attempt to catch lorry drivers and operators who were cheating emissions tests.

The move followed evidence that nearly ten per cent of haulage operators use ‘defeat devices’ to cut the cost of operating, for example by stopping emissions control systems from working, removing particulate filters or traps, or bypassing exhaust gas recirculation.

A total of 3,735 vehicle checks have taken place since the campaign began, with action taken against several firms.

In the biggest catch, a West Midlands based haulage firm was found to have deactivated ‘AdBlue’ systems on several of its lorries.

AdBlue is a solution that is sprayed over a catalyst to control the formation of nitrogen oxide (NO2), a major cause of urban air pollution, allowing the lorries to meet emissions requirements.

By using fake systems on its lorries, Knowle Transport was able to avoid buying thousands of litres of AdBlue. The company’s operator license has now been revoked for five years.

An investigation by environmental intelligence site, ENDS Report, has found that such ‘defeat devices’ are widely available online for as little as £23.

The DVSA has said that any illegal activities by hauliers is putting road users and air quality at risk, and it “will not hesitate to take these drivers, operators and vehicles off our roads”.

Posted under Environmental Regulations and Legislation on 7 March 2018