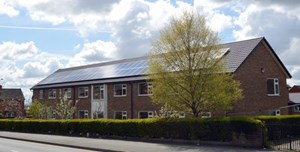 Bolton is now half way through a major rollout of LED street lighting that will see approximately 27,500 lights replaced with energy efficient LED upgrades by 2018.

The project began in April 2015 and almost 15,000 lights have been upgraded to date. Once complete, the rollout is expected to save the council around £14 million over 20 years, cutting its energy use from lighting by half.

The new lighting will be controlled by a wireless central management system to allow the lights to be monitored. As well as enabling lighting levels to be varied according to demand, this will also help to reduce inspection costs and make it easier to repair faults.

Cllr Nick Peel, executive cabinet member for environmental services at Bolton Council, said: “I’m really pleased that work is progressing so well. It’s an achievement to reach this milestone and the support and feedback from our residents has been overwhelmingly positive.

“The LED upgrade will ultimately save them money as we will see significant savings due to reduced energy bills, carbon reduction and lower maintenance costs.”

Meanwhile, the council appointed local contractor, Forrest, to install rooftop solar PV systems on four community buildings after they were identified as some of the council’s most energy intensive properties.

Now installed, the systems will generate over 2MWh of electricity each year, saving Bolton Council around £200,000 on its energy bills over the next 20 years and cutting carbon emissions by nearly 1,000 tonnes in the process.

The council currently spends £2.1 milllion on energy bills every year, with its carbon emissions costing it a further £100,000 through the government’s CRC Energy Efficiency Scheme for large organisations.

Cllr Cliff Morris, leader of Bolton Council, said: “The solar panels will not only save the council money on the running costs of these facilities, but will also contribute to meeting the Greater Manchester Climate Change Strategy target of reducing carbon emissions by 48 per cent by 2020 [on 1990 levels].”