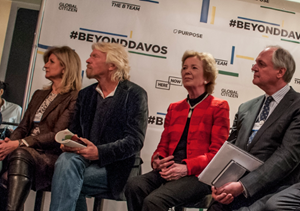 Sir Richard Branson and a group of other CEOs renowned for advocating green business are urging other leaders to join them in “setting the world on a clear, low carbon trajectory”.

The group has called for businesses and governments to aim for net-zero greenhouse gas emissions by 2050 in a move to heighten ambitions ahead of December’s crucial UN climate negotiations in Paris.

In an open letter to Christiana Figueres, executive secretary to the United Nations Framework Convention on Climate Change (UNFCCC), the group has called for:

“Setting a net-zero greenhouse gas emissions target by 2050 will drive innovation, grow jobs, build prosperity and secure a better world for what will soon be 9 billion people. Why would we wait any longer to do that?”

“It’s time for more businesses to sign up to science-based targets, reduce their climate risk exposure and capture this historic opportunity.”