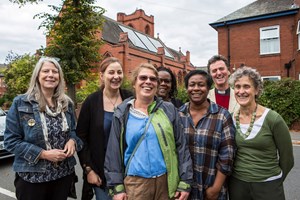 Community centres, cafés, social care charities, churches, a gym and a garden centre are among the organisations teaming up to launch a new community solar power scheme for Greater Manchester.

Community Energy GM is seeking to raise £50,000 by June, when a public share offer will be opened up for partners who would rather invest in the project than donate.

The aim is to give 20 community buildings new solar panel rooftops by the autumn, as a practical response to issues of fuel poverty and worsening climate change.

18 community groups are collaborating on the project. Together, they provide a raft of vital services for local communities, such as IT training, dance classes for all ages, furniture re-use schemes, and support for people living with disabilities.

One of the partners is St. John's Sunshine (pictured), a voluntary group based at St. John’s Church in Old Trafford.

The enterprise has already fitted 39 solar panels on the roof of St. John’s, which have generated enough funds to support a drop-in food bank for asylum seekers, beehives for a local allotment and an 'Open Gardens Day' to help local people to meet their neighbours.

Community Energy GM is supported by the Greater Manchester Centre for Voluntary Organisations (GMCVO) and the climate change charity, 10:10.

Amy Cameron, campaign manager at 10:10 said: “Solar panels aren't just a nice thing to have for these groups. Every penny they can save on their electricity bills can be put to good use elsewhere.

“And in the wake of such disastrous flooding, it’s a practical way to tackle climate change too. We know from our work with schools how powerful community crowdfunding for solar panels can be - bringing people together, as well as working to save money and the planet.

All the schemes have been pre-registered with the Government so that they can benefit from the current Feed-in Tariff rates so long as they are installed by this September.

It is hoped that all 20 installations will be completed by August or September.

A short video about the project is available here, and businesses can find out more about the community groups involved or pledge to sponsor the project here.