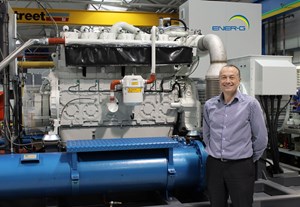 The latest government figures show that six per cent of UK electricity was generated by combined heat and power (CHP) in 2014, but it remains underexploited according to Manchester specialists, ENER-G.

The figures, from the Department of Energy and Climate Change (DECC)’s Digest of UK Energy Statistics (DUKES), reveal that the total number of CHP schemes in the UK surpassed 2,000 in 2014, helping to reduce carbon emissions by 13 million tonnes – equivalent to removing 4.3 million cars from the road.

By simultaneously generating heat and power on-site, CHP is significantly more efficient than conventional power generation, where heat is not captured. It is particularly suitable for organisations with extended periods of heat or cooling demand, such as those in the leisure, manufacturing, healthcare, education and retail sectors.

According to the Association for Decentralised Energy (ADE), CHP saved the UK economy nearly £250 million in fuel costs during 2014 by generating energy more efficiently.

However, Chris Marsland, technical director of Manchester-based CHP specialists, ENER-G (pictured), said that the technology is still not being used to its full potential.

“It's good to see CHP providing a significant proportion of UK energy production, but the technology remains underexploited”, he said.

“There are thousands more organisations that could be saving money and reducing their carbon footprint by using CHP.

“[It] is around twice as efficient as conventional power generation and provides cost savings of up to 40 per cent over electricity sourced from the grid and heat generated by on-site boilers. It can also provide a secure off-grid supply in the event of power failure.”