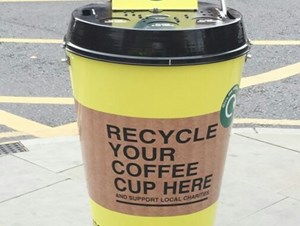 The first recycled products made from used coffee cups collected on Manchester’s streets as part of an innovative project completed earlier in 2017 have been manufactured and donated to the city.

The mixture of polyethylene coatings and paper used in coffee cups is difficult for recyclers to separate, meaning that most are burnt or go to landfill - causing a significant environmental burden.

Almost 30,000 cups were collected in total during the project to be shredded into pellets and combined with a resin to create new products.

Sustainable project designers, ashortwalk, have used the recycled polymer to produce bird feeders, plant pots and chalk boards, the first of which have been donated for use in Old Trafford’s Centenary Gardens.

“It was wonderful to see how the people of Manchester embraced the idea of recycling their coffee cups last year and it’s a real pleasure to donate the end results back to the city’s green spaces”, said Gavin Ellis, co-founder of Hubbub.

The successful experiment has since been rolled out on a bigger scale in London’s Square Mile as part of a collaboration between the City of London Corporation and some of the area’s biggest employers.

“What started as a small trial in Manchester has now resulted in almost 1.5 million cups being recycled since April this year in London and we’re set to expand to other cities across the UK and overseas”, Ellis added.

“And coffee cup recycling lives on in Manchester with our recycling partner Simply Cups recently announcing plans for expansion in the city.”