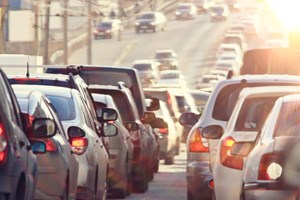 We take an in-depth look at the future of transport in the government’s landmark Clean Growth Strategy, which aims to make almost every car and van ‘zero emission’ by 2050.

Tackling carbon emissions from transport is one of the more difficult actions the government must take to hit future carbon targets; most of the improvements to date have mainly been offset by rising traffic.

A Clean Air Strategy to reduce urban air pollution from vehicles in towns and cities has been announced for 2018, but the Clean Growth Strategy recognises that more must be done to encourage a transition to cleaner transport at the national level.

It states that almost every car and van will need to be ‘zero emission’ by 2050, with the government having already announced a ban on the sale of new petrol and diesel cars from 2040.

To support the development of new technologies to reach this target, the strategy sets out £841 million in government support for innovation in low carbon transport technology and fuels, covering electric vehicles and batteries, charging technology, advanced fuels, and low emission HGVs.

Meanwhile, as part of a £1 billion investment to support the take-up of ultra low emission vehicles, including helping consumers and businesses to overcome upfront cost of cars and vans, an additional £80 million will be invested in national charging infrastructure.

Under the recently announced Automated and Electric Vehicles Bill, motorway services and large petrol retailers will be obligated to install chargepoints for electric cars. The chargepoints will be easily locatable using sat navs or mobile apps, which will also detail their costs and availability.

The aim is to create “one of the best charging networks in the world”, with chargepoints available every 20 miles across 95 per cent of England’s road network.

The government will also continue funding the Go Ultra Low initiative until at least 2020 to ensure consumers and businesses are given the right information on low emission vehicles.

New procurement standards will also be set by government to rapidly increase the uptake of zero emission vehicles in public fleets.

More detail on specific policies will be provided by March 2018, when the government will publish a long-term strategy for the 2050 zero vehicle emissions target.

A wider summary of the Clean Growth Strategy is available here.