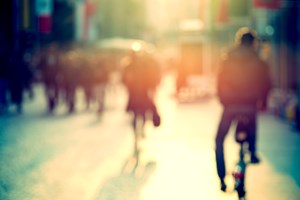 Manchester and Salford are set to launch a six-month urban bicycle sharing pilot that enables users to pick up and drop off bikes almost anywhere in the city centre.

The trial is being run by Mobike, the world’s largest bike sharing company.

Mobike runs cycle hire schemes in 100 cities in China and Singapore, but the Manchester and Salford pilot is the company’s first expansion into Europe.

The pilot will see 1,000 bikes made available for public hire as part of a plan to make urban cycling more convenient and attractive.

Pick up, drop off

A unique bike design, built-in smart lock and cashless smartphone app system allows cyclists to pick up and drop off hire bikes at any convenient cycle parking location, rather than needing to be parked at dedicated docking stations.

The app enables users to locate a nearby bike using GPS mapping and unlock it automatically by scanning a QR code on the bike.

Starting on 29 June 2017, the pilot will be the first ‘non-docking station’ scheme of this scale in the UK.

In a statement, Steve Pyer, general manager of Mobike UK, said Manchester and Salford would become “a showcase for the urban transformation that is possible when cycling usage rises, and city planning leverages smart data.”

The announcement has already been hailed as an important stepping stone towards more sustainable transport in the city region.

Sir Richard Leese, leader of Manchester City Council, said he was “excited” that Manchester had been given the opportunity to be at the forefront of trialing the cutting-edge technology, while Salford City mayor Paul Dennett described it as “a great initiative”.

“Bikes are proving more and more popular in urban areas around the world and it is great to see Salford tapping into this trend with our sister city in Manchester”, he added.

Transport for Greater Manchester (TfGM) is now working with Mobike to ensure the service operates in a way that does not inconvenience other road users, pedestrians or city centre traders.

Posted under General Interest on 19 June 2017