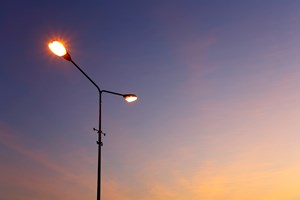 Following in the footsteps of Greater Manchester and other regions, Cheshire West has begun upgrading 24,000 residential streetlights to LEDs to cut energy consumption.

The replacement programme will see thousands of sodium lamps replaced with more efficient LEDs across the borough.

Cllr Karen Shore, Cheshire West cabinet member for environment, said the aim of the move would not only cut costs and carbon emissions, but also extend the life of streetlights and improve safety.

“It is hoped the new LED lights will achieve savings of around 40 per cent on our energy consumption”, she said.

“Most current lamps in the borough have a guaranteed life of three years. The LED technology we are using has manufacturers’ warranties for 12 years, and could last as long as 20 years.”

Compared to the more yellow light of sodium lamps, the white light of LEDs also allows colours to be more easily identified at night.

The work is scheduled to be complete by September 2018 and is estimated to cost around £5.1 million.

Bolton is now half way through a major rollout of new street lighting that will see approximately 27,500 lights replaced with LED upgrades by 2018.

The project began in April 2015 and almost 15,000 lights have been upgraded to date. Once complete, the rollout is expected to save the council around £14 million over 20 years, cutting its energy use from lighting by half.

The new lighting will be controlled by a wireless central management system to allow the lights to be monitored. As well as enabling lighting levels to be varied according to demand, this will also help to reduce inspection costs and make it easier to repair faults.